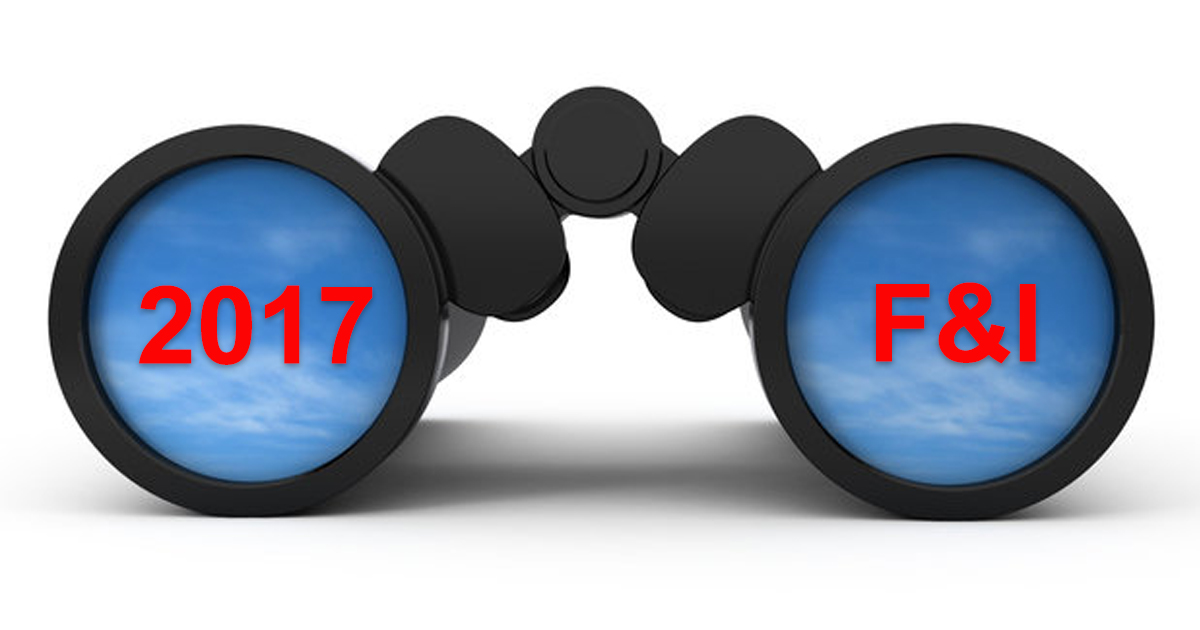 Are there big changes in store for the finance and insurance office in 2017? Here are five issues and trends to watch in the new year.

Bills to limit the Consumer Finance Protection Bureau have circulated over the past two years, with bipartisan votes from the House of Representatives to limit the bureau, but they didn’t get through the Senate, much less to the president’s desk.

Under the new Republican administration, they have a greater chance of passing, and the bureau may have to change its structure.

In 2015, H.R. 1737, or the Reforming CFPB Indirect Auto Financing Guidance Act, passed the House by a wide margin, 332-96. In March 2016, S. 2663, its companion bill, was introduced in the Senate and referred to the Committee on Banking, Housing and Urban Affairs. In September, the Financial Choice Act, H.R. 5983, passed the House Financial Services Committee. Financial Choice Act would also limit the CFPB’s 2013 auto lending guidance.

If the Senate bill were to pass, it likely would have been halted by a Democratic White House. President Obama had opposed H.R. 1737, saying it would revoke “important guidance designed to prevent discriminatory pricing of auto loans.”

Now, with a Republican president-elect, the bills have a higher chance of being signed into law.

The structure of the CFPB and the existence of parts of the Dodd-Frank Act, which established the CFPB, were also challenged in 2016.

In October, the U.S. Court of Appeals for the District of Columbia Circuit ruled that the structure of the CFPB was unconstitutional. Under the ruling, the president will have the power to supervise and direct the CFPB director and to remove him or her at will. The previous CFPB structure allowed the director to be autonomous and fired by the president only for cause.

The CFPB appealed the decision in November, so the legal battle continues.

Steven Mnuchin, Trump’s pick for treasury secretary, told CNBC in November that “stripping back part of” the Dodd-Frank Act, will be one of his top priorities, though he didn’t provide details on how the CFPB could be affected.

2. Dawn of the digital transaction, at last?

Some companies have said they could make the completely online vehicle purchase a reality in 2017. Among the hurdles to a totally online transaction are states’ varied regulations, many of which still require wet signatures on paper and thus in-person deliveries.

Companies such as Cox Automotive and RouteOne, tech startups and large dealership groups are all part of the movement to complete financing online.

For example, multiple Cox Automotive companies are involved in some aspect of the retail experience. By linking those companies together online, Cox plans to play a role in each phase of a completely digital transaction.

“We are actively building all of the capabilities to host the documentation, to calculate the taxes and fees to the penny, to prepare the online deal structure in order to enable that transaction,” Mike Burgiss, Cox Automotive’s vice president of strategy and mobility, said in August when he was vice president of digital retailing.

RouteOne also has a goal to provide a fully online transaction. It says its purchase of F&I service provider MaximTrak in December will help it get there.

Automotive News highlighted the industry trend toward enhancing the customer experience in our March 2016 F&I Insight section, which explored F&I as a service business. We expect the trend to continue.

With alternative data to help more consumers qualify for an auto loan and even with an altered dealership experience, the industry is making the customer a priority. For example, some stores are trying the single-point-of-contact model, where one person handles both sales and F&I. Some say the customer prefers working with one person throughout the entire transaction.

Industry experts have mixed views of the hybrid model, but after an adjustment period, the switch has paid off for some stores.

As lenders tightened up lending standards, subprime originations fell in 2016, along with subprime loan originations’ share of the finance market.

Experts also expect delinquency rates to rise in 2017 as a result of higher interest rates and more subprime borrowers. The rise is a natural effect of more subprime lending and is not a cause for concern, according to TransUnion.

Lenders have deliberately accepted more risk from nonprime loans, Jason Laky, senior vice president and automotive and consumer lending business leader at TransUnion, said in a statement. “An increase in delinquency is the natural consequence of that strategy. If lenders are compensated for the additional risk in the portfolio, a modest increase in delinquency should not disrupt the auto finance market. We do not expect to see a surge in auto delinquency unless there is an economic shock.”

In the third quarter, auto loans outstanding totaled $1.1 trillion. Of that, $172 billion was subprime, just 16 percent of the industry, Laky said.

“$172 billion of subprime auto loans is not a terrible risk to the financial system,” he said. “It’s a pretty liquid market. If a lender has to repossess a car, they can do it and remarket it pretty quickly.”

5. Coping with the influx of lease returns

With nearly 3.6 million off-lease vehicles coming to the market in 2017, according to Manheim estimates, the industry will have to continue to come up with ways to handle that surge of late-model used vehicles.

One strategy that emerged last year was used-vehicle leasing. Toyota, Ally Financial and BMW encouraged used and certified pre-owned leasing to prepare for the glut of lease returns. But used-vehicle leasing still only makes up a sliver of the market. From January to June, 1 percent of the used retail sales market was leases, Edmunds.com data shows.

Many lenders are turning off-lease vehicles into certified pre-owned sales. Barrett Teague, vice president of lender solutions for Black Book, said that compared to 15 years ago, lenders today are paying more attention to depreciation. Moreover, they have access to data that says a vehicle is lasting longer, say even 10 years, he said.

Historically, a vehicle may have just a 36-month value, he said. “After that, you couldn’t predict what would happen to a vehicle.”

With more predictive data now available, auto lenders can determine how incentives and leasing fit together. That could mean adjusting lease-term spreads. “Don’t be stuck in 24- or 36-month terms,” Teague said.

Some vehicles benefit from pull-aheads or extended leases, depending on the vehicle. Lenders are able to, and should, offer incentives to get consumers to pull ahead or extend the lease if the vehicle will be more valuable before or after the lease is scheduled to end, he said.