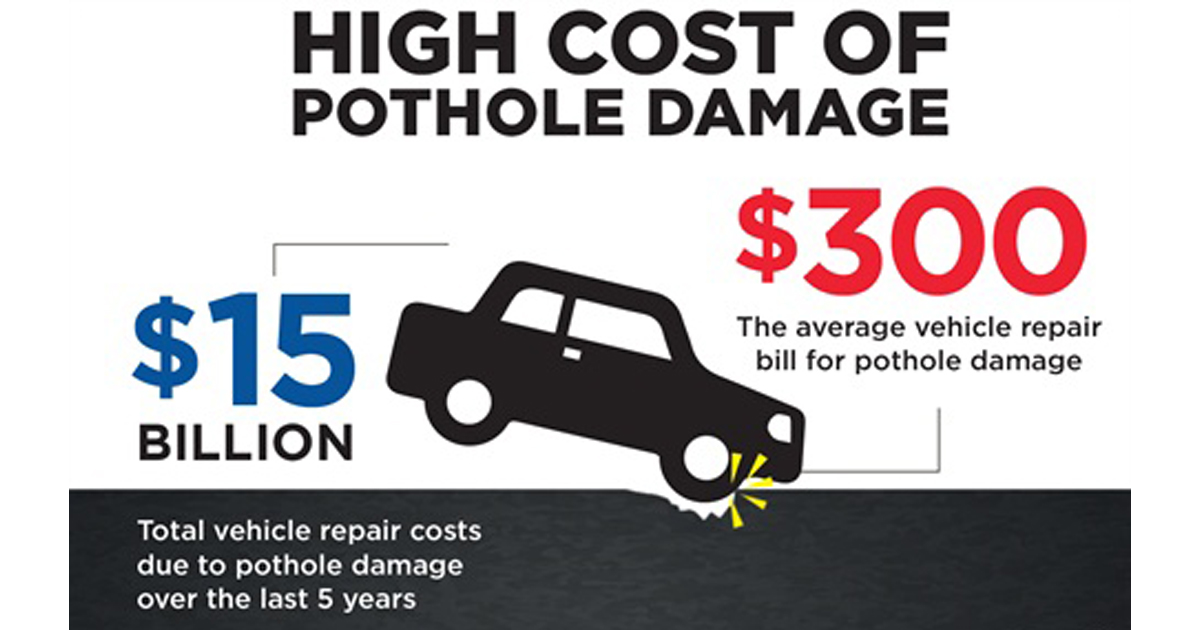 Most likely you've seen the headline:

We have the solution!

Automotive Assurance Group offers two comprehensive and valuable programs to our dealers that can protect US drivers, your customers from costly pothole damage.  With Allstate Complete Protection and Tire & Wheel Programs your customers can protect their investments and not be part of the staggering statistic that is making headlines.

“In the last five years, 16 million drivers across the country have suffered pothole damage to their vehicles,” said John Nielsen, AAA’s managing director of Automotive Engineering and Repair. “The problems range from tire punctures and bent wheels, to more expensive suspension damage.”

According to AAA’s survey, middle- and lower-income individuals are the most worried about potholes, with the majority of respondents in households having annual incomes under $75,000 expressing the highest levels of concern over damaged roadways. This is likely due in part to the financial impact, as pothole damage can lead to expensive and extensive vehicle repairs.

“On average, American drivers report paying $300 to repair pothole-related vehicle damage,” continued Nielsen. “Adding to the financial frustration, those whose vehicles incurred this type of damage had it happen frequently, with an average of three times in the last five years.”

To minimize vehicle damage, AAA urges drivers to ensure tires are properly inflated and have adequate tread depth, as they are the only cushion between a pothole and the vehicle. If a pothole strike is inevitable, it is also critical that drivers slow down, release the brakes and straighten steering before making contact with the pothole. To avoid potholes in the roadway, drivers should remain alert, scan the road and increase following distances behind the vehicle ahead.

AAA’s members are paying a steep price for bad road conditions, and those costs are expected to rise even higher in the years ahead. Americans rely on our nation’s roads and bridges every day, and more funding is desperately needed to prevent potholes, other unsafe conditions and longer commutes. Congress increased transportation funding in 2015 to help pay for road repair, but as much as $170 billion in additional funding is needed per year to significantly improve America’s roads and bridges.

Every year, AAA responds to more than four million calls for flat tire assistance, many the result of damage caused by potholes. Spare tires, an important feature missing from one-third of 2015 model year vehicles sold, are critical for drivers affected by pothole damage. Tire inflator kits have replaced the spare tire in millions of vehicles over the last 10 model years and, due to their limited functionality, cannot provide even a temporary fix for pothole damage. AAA has called on automakers to put consumer interests first and halt the elimination of spare tires in new models.

As North America’s largest motoring and leisure travel organization, AAA provides more than 56 million members with travel, insurance, financial and automotive-related services. Since its founding in 1902, the not-for-profit, fully tax-paying AAA has been a leader and advocate for the safety and security of all travelers. Motorists can map a route, identify gas prices, find discounts, book a hotel and access AAA roadside assistance with the AAA Mobile app for iPhone, iPad and Android. Learn more at AAA.com/mobile. AAA clubs can be visited on the Internet at AAA.com.

Above is a Press Release from AAA, you can view it here: at http://newsroom.aaa.com/2016/02/pothole-damage-costs-u-s-drivers-3-billion-annually/